Analysis of platinum by XPS is typically performed on the Pt 4f region. Platinum is very commonly found combined with alumina in heterogeneous catalysis, resulting in a very difficult deconvolution due to a significant overlap between the Pt 4f and Al 2p regions. 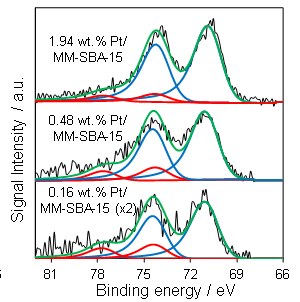 A table of common binding energies may be found below: