The XPS analysis of ceruium is not for the fainthearted…

Cerium is a very useful material in heterogeneous catalysis and other fields due to it’s ability to store and move oxygen, but the XPS spectrum is not straightforward to deconvolute due to complications arising from final-state effects. Typically, cerium is observed as either Ce(III) or Ce(IV) and both states  produce complex spectra. There is a significant spin-orbit separation between the 3d5/2 and 3d3/2 emission features (Δ = 18.6 eV) 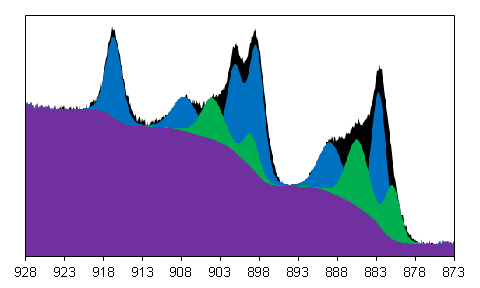 Ce3+ has a ground state of 4f1 5d0 6s0 but following photoemission of a 3d core electron may split into two final states. One is the poorly screened 4f1 ground state (higher energy) and the other is a well screened 4f2  state, following a charge transfer process. Including spin-orbit coupling this leaves us with 4 peaks for the 3+ state.1

Ce4+ was typically thought to have a ground state of 4f0, however XPS analysis of CeO2 recorded 3 peaks (6 peaks taking into consideration the spin-orbit coupling effect), similar to a range of mixed valence compounds such as αCe, CePd3 and CeRh3. From this, it was determined that quadrivalent Ce is actually a mixture of ground states – 4f0, 4f1L and 4f2L2 (L is a hole in the O 2p band) due to strong covalency hybridisation between Ce 4f and O 2p.1

Cerium spectra may be assessed qualitatively in pure forms, however mixed oxidation state materials may be deconvoluted successfully and has been done in many pieces of literature.2

Using the Area, FWHM and Position constraints in CasaXPS is vital to obtaining a physically relevant deconvolution of Ce 3d XPS spectra (we would also recommend using the component index feature to organise your peak models).

Use literature values, or better yet use models developed from analysis of pure standard materials on the same XPS instrument as the unknown mixture (to account for spectrometer line width etc), to create a peak model to assess 3+/4+ ratios.

The video below contains a quick guide to approaching the analysis of Ce 3d XPS spectra using the work of Romeo et al.3-5

It is important to use literature values as a guide only, since you may find differences in binding energy, FWHM and even small changes to area ratios as a result of instrument factors (line broadening, X-ray source), experimental factors (calibration) and sample factors (particle size changes can induce lattice strain which can in turn affect binding energies).6

A table of the initial and final states may be found below (table 1).

For reference, the table of values from the work of Romeo et al3 is below: