Note for below: WordPress does not support underlining characters – so core holes will be described using a bold text-type rather than an underlined text-type. Apologies for the confusion.

S-orbitals characteristically exist as single peaks in XPS analysis and indeed, if one were to only analyse principal photoemissions then this rule would remain mostly true (1s orbitals may undergo splitting in paramagnetic molecules).(1) First row transition metals are well known for their complicated multiplet structures within the principal photoemission (2p) due to unpaired electrons(2) however the multiplet splitting within the 3s peaks may often be more help than hindrance.

The origin of this 3s splitting was historically ascribed solely to exchange coupling between the 3s hole and 3d electrons,(3) however it was soon observed that the shape of this 3s peak was dependent on the ligand and that inter-atomic charge transfer effects should be considered.(4) This was shown by Veal and Palikas as (3s)1(3d) n-1L and (3s)1(3d)n.(4)

A commonly observed s-orbital exhibiting multiplet splitting is that of Fe 3s. Since multiplet splitting of s-orbital is known to be an important process in magnetic materials, it should be of little surprise that iron be one of the more prominent examples. Fe 3s peaks split into 2 individual states which are relatively simple to resolve.

Poorly or non-conducting iron compounds may display a direct and observable relationship between the localised magnetic moment and the Fe 3s multiplet splitting as per equation (1).5

This relationship assumes a constant atomic exchange integral, and electron correlation effects and may be used, with a system with common atoms (e.g. Fe, FeF2 and FeF3) to create a calibration profile to determine localised magnetic moment.

This relationship breaks down slightly in conductive materials, due to relaxation and final state effects involving itinerant electrons – however it serves to highlight the relationship between multiplet spitting of Fe 3s and magnetic moment.

In time, this relationship has come to be appreciated in the form of:

Where mutiplet splitting, ΔEnsvv, is roughly proportional to the product of the exchange integral between the s core hole and the 3d electron (Es, d) and 2S + 1, where S = the magnitude of the local 3d spin. Due to the numerous complexities of this relationship, absolute values for multiplet splitting are oft of little use, however the ratio between the two spin states may afford insight into the local magnetic moment when compared with literature data.6

Manganese 2p XPS is characterised by small energy differences between chemical environments, along with slight multiplet splitting (in the form of peak broadening) rendering analysis a complicated affair.

Mn 3s in this case permits an additional technique by which to probe the chemical and electronic environment of the Mn species – through the analysis and comparisons of Mn 3s peak splitting. 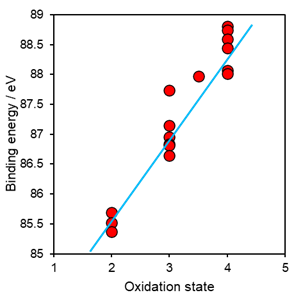 Whilst this is often used as a determinant for the dominant oxidation state of a system, it has indeed been used previously as a descriptor for the ratio of Mn states within a complex system. For example, Kochur et al used Mn 3s splittings (ΔE3s(LS–HS) – where LS & HS refer to the low spin and high spin components respectively) as a measure of Mn3+/Mn4+ ratio within LBMO ceramics.8